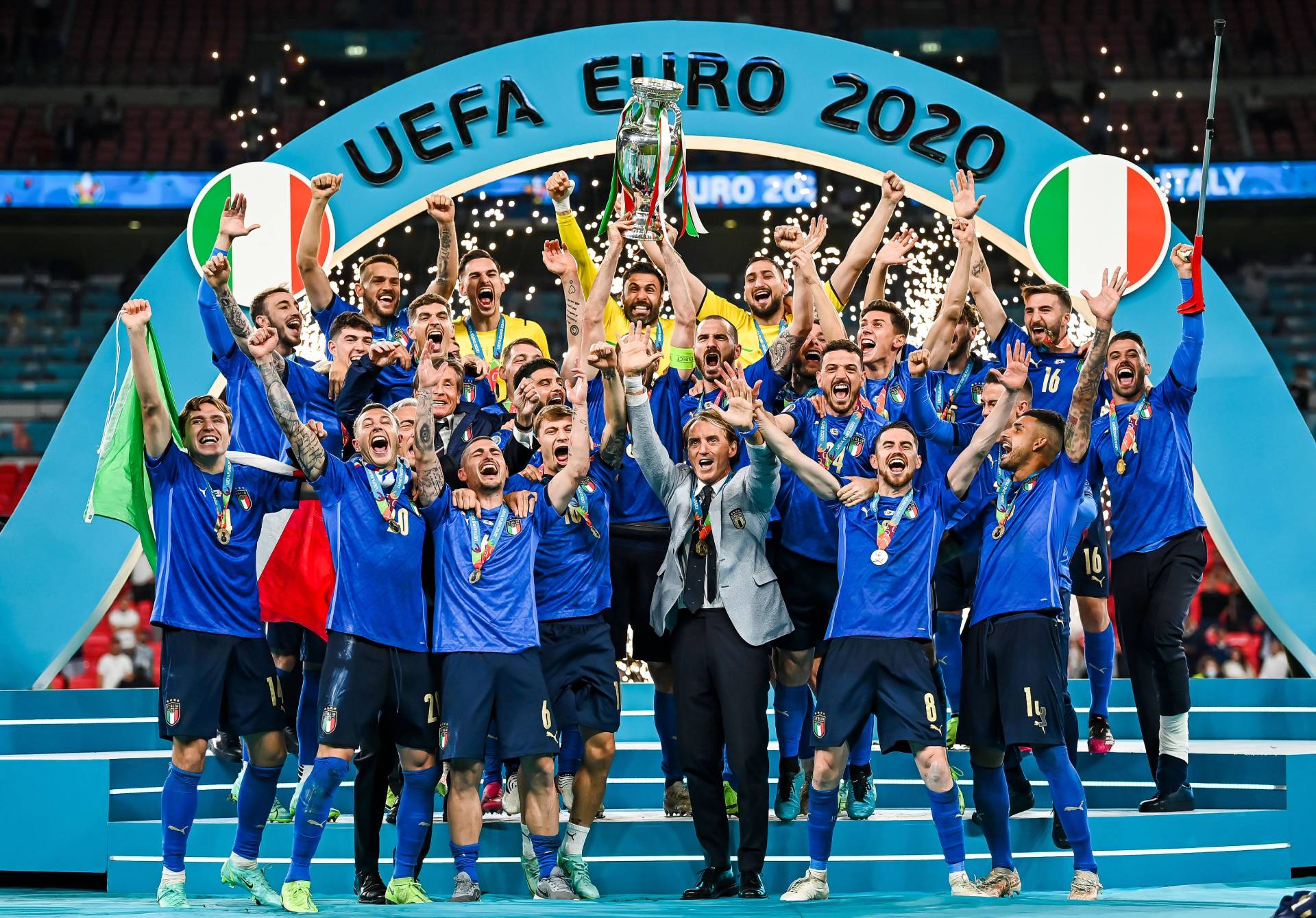 Italy beat England 3-2 on penalties and won the Euros at the latter’s home turf at Wembley Stadium on Sunday in a cracker of a game. Luke Shaw scored in the second minute, and Leonardo Bomucci equalized in the 67th minute, but the game stayed a stalemate to stretch it to penalties. Italy have won their second European Championship title, and first in 53 years (also 1968); it’s the longest ever gap between championships in the tournament by a single nation, surpassing Spain’s 44-year wait from 1964 to 2008.

Luke Shaw scored the fastest goal of a Euro final ever, with an assist from Kiren Trippier giving England a great start, who went on to dominate the first 20 minutes of the game. Italy had a few chances from set pieces, and a couple of half chances, that they failed to convert in the first half. Italy played better in the second half, with Bonucci becoming the oldest scorer of a Euro final (34).

Federico Chiesa tried to single handedly get Italy back in the game, but his attempt was a little wide of the target. The 60,000 fans were behind the English, and supported their team constantly. The Italians were pressing Southgate’s men, but were not able to find the back of the net. At the start of the second half, Sterling dribbled past two Italy defenders, and there was a shout for a penalty, but the replay showed that the forward was trying to initiate contact.

He committed a foul of his own on the other end, giving Lorenzo Insigne a chance from the set piece that went over the bar. But it was from a corner that led the Italians to make it 1-1. The ball pinballed a bit, and two England players fell, giving Bonucci a chance to put it away on the rebound. Southgate switched to a 4-3-3 formation, sending Saka on the right, but the home side almost went behind when Domenico Berardi’s long pass to Bonucci failed to land in the back of the net.

Italy’s star nan Chiesa got injured, and they lost the momentum. Mason Mount combined with Shaw and Saka, with Sterling going deep into the box, but they couldn’t score. Towards the end of the game, Saka broke free, but was brought down by Giorgio Chiellini, who was rightfully booked for the challenge. This forced extra time, the second game in a row for both teams.  Chiellini blocked a shot from Sterling at the restart, and Jack Grealish also got some minutes giving the Italisns a hard time. Emerson crossed the ball into the box, but Bernardeschi’s shot was blocked first by Pickford, and the rebound by Nat Philips.

Bernardeschi’s free kick was blocked by Pickford in the second half, and Grealish’s shot was blocked on the other end by Donnarumma who punched it clear. Southgate’s introduction of Rashford and Sancho did not help them score, and the game went to penalties. Pickford denied Belotti, but Rashford and Sancho missed their chances. Jorginho missed his chance, but Saka’s effort was saved by Donnarumma who became the Italian hero winning the title for them.

Even though he ended up on the losing side, Jordan Pickford can be proud of his performance tonight:

Italy manager Roberto Mancini: “It was impossible even to just consider this at one stage, but the guys were just amazing. I have no words for them, this is a wonderful group. This was a difficult game made a lot harder after their early goal. Apart from that early spell, we dominated the match.

“You have to have a little luck on penalties. I feel a little sorry for England, because they also had a great tournament. The team has grown a lot and I think we can improve further. We are very happy for all Italians. I have no words for these guys!”

England manager Gareth Southgate: “I chose the penalty takers based on what we’ve done in training and nobody is on their own. We’ve won together as a team and it’s absolutely on all of us in terms of not being able to win the game tonight.

“But in terms of the penalties, that’s my call and totally rests with me.

“We’re hugely disappointed because firstly, the players have been an absolute credit. They’ve given everything they possibly could tonight, they’ve run themselves into the ground. At times, they played really well and at times, we didn’t keep the ball quite well enough, especially at the beginning of the second half.

“But they can’t have any recriminations. They’ve been a joy to work with and they’ve gone further than we have for so long, but tonight, it is incredibly painful in that dressing room… You have to feel that disappointment because the opportunities to win trophies like this are so rare in your life.

“But when they reflect on what they’ve done, they should be very proud of themselves.”