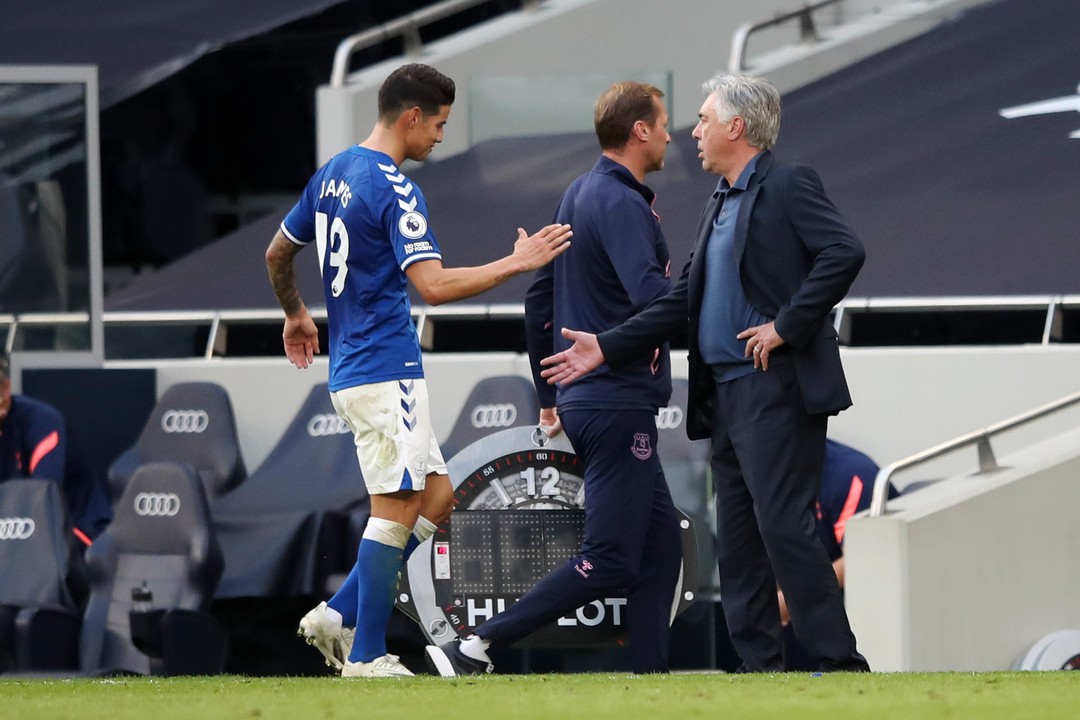 Jose Mouurinho started the season with a loss for the first time in his managerial career last night when he lost 1-0 to Everton at home. The only goal of the game was scored by Domini Calvert Lewin in the 55th minute with a set piece, smashing the ball into the net.

James Rodriguez, Allan, Doucoure all were started against Spurs and they proved to be highly effective for Ancelotti’s men.  James’ stats looked as if he was a player who was deprived of football for quite a while, as he played only 3 times for Madrid last season. He was really the man in the middle of the park for the toffees.

Allan worked very hard for his debut in the Premier League. Even though the goal came from a set piece, Everton were clearly the better side.  “Players that know how to play football don’t need time to adapt,” said Ancelotti after the game.

James Rodríguez had himself an impressive Everton debut:

Spurs were looking tired from the off, and their opponent looked fresher, more determined, and more clinical in the middle of the park. Jose being himself was putting the blame on the players being lazy, and not in top shape and form. Tottenham have reliable players upfront in Kane, Son, Dele Ali, Bergywin, but they’re poor at the back, and easy to break down. The club needs to find defenders in the market in order to strengthen their back line.

Jose told Sky Sports: “The struggle started in the way we pressed or, I will say, in the way we didn’t press because our pressure up was very poor.

“I would say it was lazy pressure and when you have lazy pressure, you don’t press and you let opponents build from the back and then they have players with incredible quality, which is not just Everton, it’s almost everybody in the Premier League. When you let them play from the back then they are comfortable with the ball.”

He added: “Lazy pressure. Lazy pressure up front, that is what I am saying, and that creates unbalanced situations for the rest of the team. I could also feel that some of my players are not fit. Matt [Doherty] was struggling to play the way he plays and the way you want him to play, as an example.

“We also had other players that were a little bit in trouble from a physical point of view. Two very strange pre-seasons for some and in other cases not even a pre-season, but congratulations to my dear friend Carlo and the Everton boys.”

I find it incredible because before the goal, I was already saying it to the referees. Five metres on the crossing situation makes a huge difference in the position of our back line and in the direction of the cross.

“But I don’t want to stay too much on these things.”

Everton have clearly added a lot of quality and with Ancelotti coming in, there could be really something happening this season. The rejuvenated side could be miles ahead of Spurs if the latter do not strengthen their squad in the transfer market.