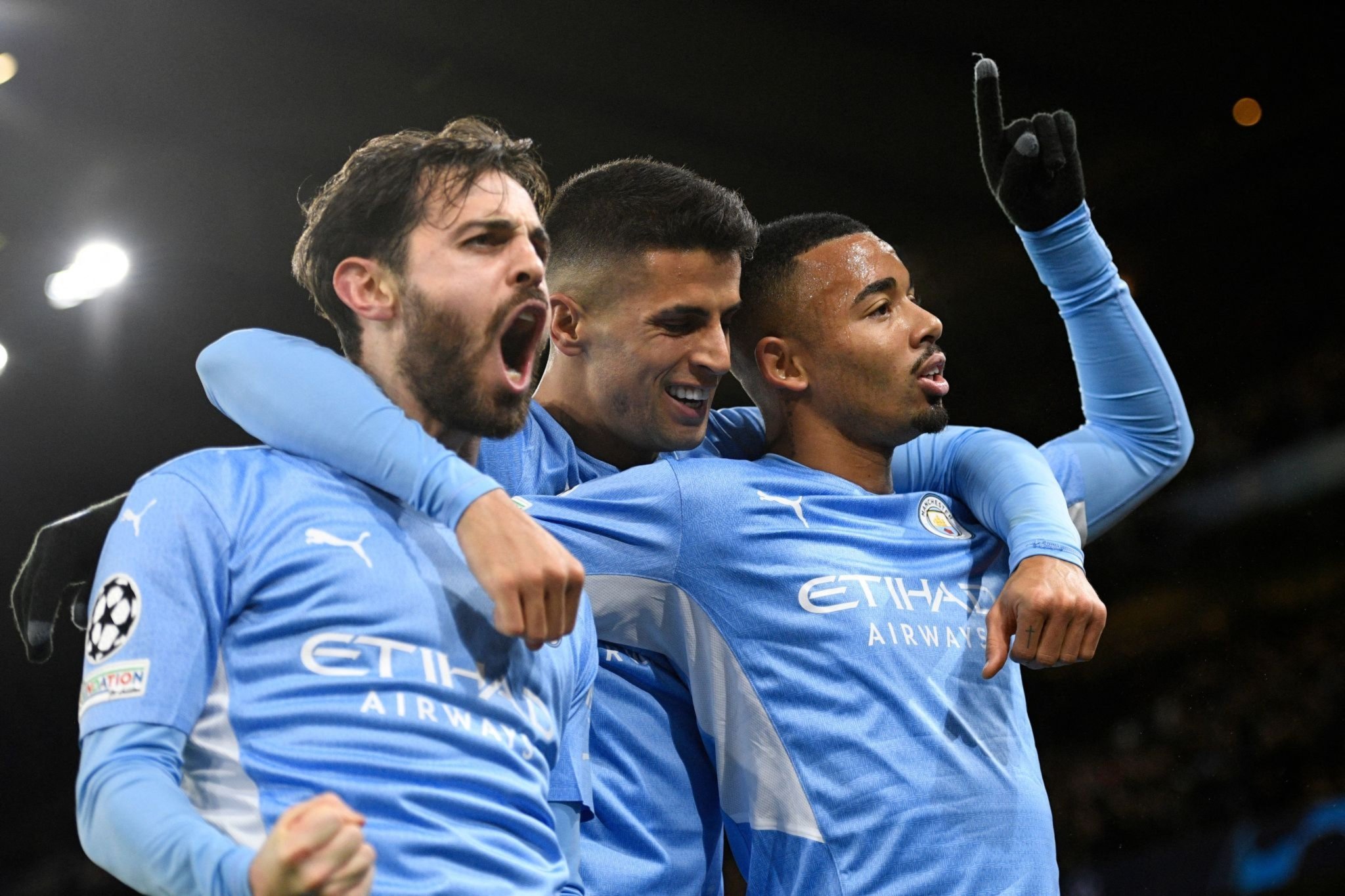 Manchester City beat PSG 2-1 at the Etihad Stadium last night in the UEFA Champions League group stage game to get the top spot in Group A. Goals from R Sterling (63’63rd minute), and G Jesus (76’76th minute) cancelled out Kylian Mbappe’s opener to get all three points. Although the Parisians lost, they’re through since RB Leipzig won against Club Brugge in the other fixture.

It was Manchester City who dominated the game right from the off, but couldn’t find a breakthrough in the first 45 minutes. Mauricio Pochettino’s men just soaked the pressure and took it in, trying not to concede. Pep’s men paid the price for their missed chances with the opening goal from Kylian Mbappe, but it was good riddance since they scored two more to turn it around.

Kevin De Bruyne, Phil Foden and Jack Grealish were absent from the lineup, but Pep Guardiola’s men still managed to have enough firepower to go all guns blazing at PSG, creating many clear-cut opportunities. Presnel Kimpembe cleared Rodri’s header off the line from Riyad Mahrez’ free-kick.

Mahrez was heavily involved in the action for City in the first half and the visitors needed Achraf Hakimi to divert the Algerian’s curled effort over the crossbar. Ilkay Gundogan’s effort hit the crossbar, but the offside flag was raised anyway. Keylor Nawas produced a fine low save in the play.

The hosts got a warning towards the end of the first half when John Stones was caught in the box by Neymar who gave the ball to Mbappe. The Frenchman’s shot however went over Ederson’s crossbar.

It was PSG who started the second half with a lot of pace and scored the first goal. Lionel Messi and Kylian Mbappe were heavily involved in the attack. The Argentine’s deflected cross kindly fell for Mbappe who scored through Ederson’s legs.

Man City were a goal down, but they responded well as they equalized 13 minutes later. Raheem Sterling scored from Kyle Walker’s cutback to make it 1-1 for the hosts. The turnaround was complete 14 minutes from time when Bernardo Silva produced an exquisite touch to play Mahrez’s cross into the path of Jesus, who finished into the far corner to secure City’s place in the last 16.

What the managers said

Man City boss Pep Guardiola: “It was a good game. The sense of danger when they have the ball in the final third is terrible, but, again, we did a good performance. It was unfortunate in the first half the chances we had we couldn’t convert and, from nothing, they have the quality to do it. After the goal we suffer for five-10 minutes but, after that, with our people – thank you to how they supported us – it was a lovely night for us.

“Always I believe with these type of players [(Messi, Mbappe, Neymar, Di Maria], as far as they are from our goal, we are safer. The much closer they are, they found the space. The action where Neymar was in front of the ‘keeper and missed it, so they found from nothing… they are too good up front! We had to defend as a team. If you believe one guy is going to solve the quality they have, it’s impossible. We were there with good composure at the end. I don’t know the stats, but I think we were brilliant again today, and that’s good for us.”

PSG boss Mauricio Pochettino: “Yes, disappointed but at the same time, City, in the first half, they played well, and they forced us to play deeper. They were very aggressive. Being honest, I think we need to give the credit to Man City.

“But second half, it’s true after 0-0 in the first half, we scored, we were calm because we were controlling them very well. The circumstances of the game changed a little bit and we conceded two goals. Man City is a very good team. The objective was to qualify and then to be first. But we beat Man City in the Parc de Princes, we lost here. The difference here is the draw against Brugge and Leipzig, that is why we finished second, not because of the two games we played against Man City.”

Phil Foden was missing from the Manchester City squad. The England midfielder was replaced by Riyad Mahrez as Pep Guardiola made three changes for the Group A encounter from the side that brushed aside Everton on Sunday. Ruben Dias and Oleksandr Zinchenko were the other players to come in, with Aymeric Laporte and Cole Palmer making way.