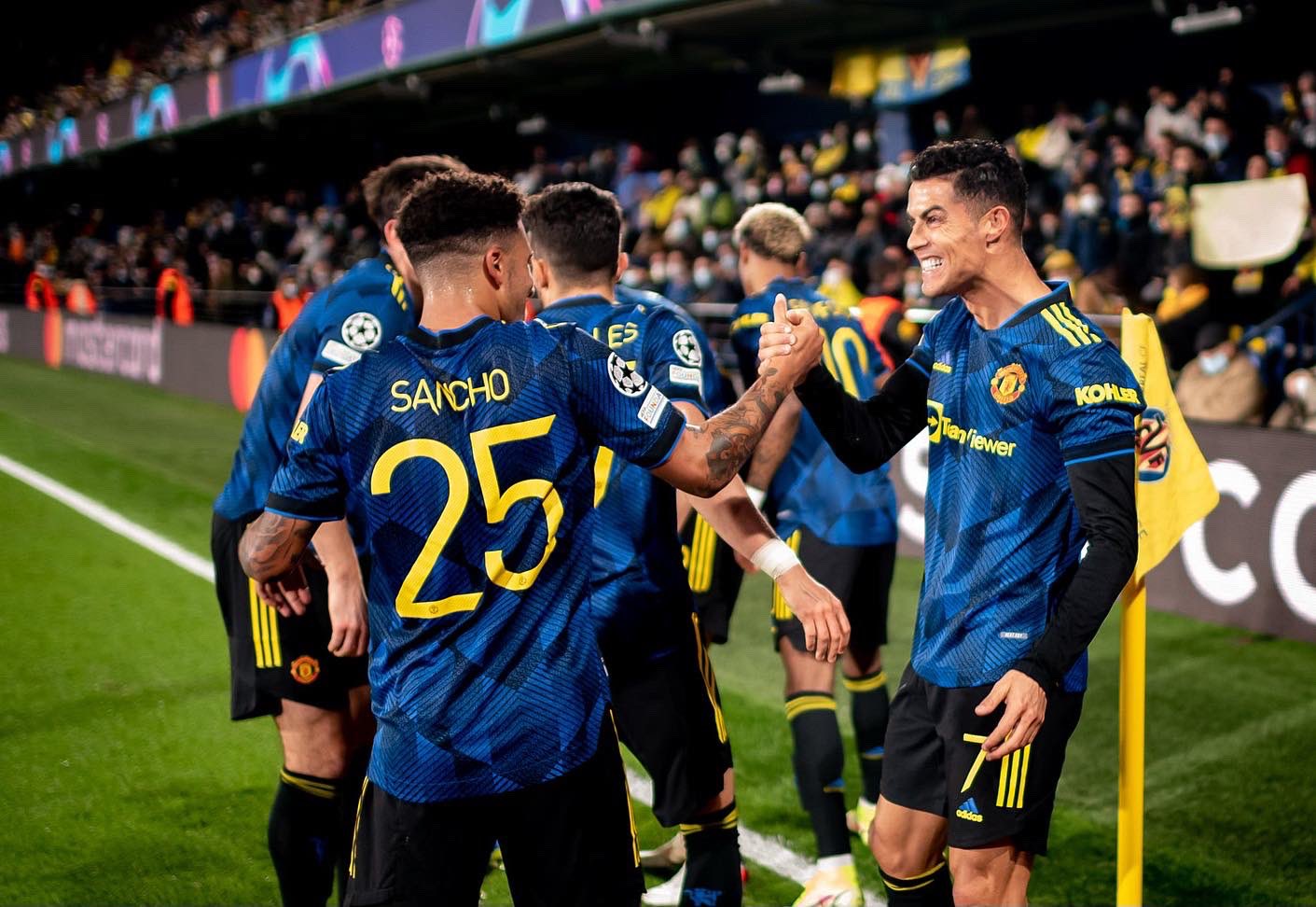 Manchester United beat Villareal 2-0 to book a place in the knockout stages of the UEFA Champions League. Goals from Cristiano Ronaldo and Jadon Sancho saw Michael Carrick’s United seal the deal in Spain. They still have a game to spare as they finish top of their group, great news for them.

Michael Carrick made four changes to the starting lineup in his first game, the most notably of which was leaving Bruno Fernandes on the bench. Donny Van Der Beek, Victor Lindeloff, Alex Telles, and Jadon Sancho got a start. The visitors struggled in the first half to break down Villareal, who had most of the chances but couldn’t take them either.

Late goals from Cristiano and Sancho saw United take all three points. Cristiano’s chipped effort and Jadon Sancho’s emphatic finish from a team build up was a great piece of play. Villarreal will have to fight it out with Atalanta, who drew 3-3 with Young Boys, for the runners-up spot.

Bruno Fernandes, the player who has created more chances than any other player in both the Champions League and Premier League this campaign was missing from the team sheet in such a crucial game for United. This raised a lot of doubts in the mind of fans who are already skeptical about the appointment of Michael Carrick as an interim manager.

David De Gea had to make a lot of saves in the first half as Villareal kept attacking United.Moi Gomez’s early low shot effort and Manu Trigueros’ effort was denied by the Spaniard. Carrick had to make changes in the second half as he brought on Fernandes and Marcus Rashford to have more speedy attacks. Geronimo Rull was forced to make a save by the link up of Sancho, Bruno, and Ronaldo.

What the managers said…

Villarreal boss Unai Emery: “I think we were very good for about 60 or 70 minutes against a Manchester United who were the favourites in this group.

“We had chances, we were controlling the ball and we haven’t given them any kind of chances in these 70 minutes. But when they changed their players it gave them a boost and we were not playing the same way. They were speeding up and it has been a bit overwhelming for us.”

Interim Man Utd boss Michael Carrick: “The result obviously is a major plus from the run we’ve gone on – we can’t hide that. To get that feeling of winning a football match for the players is huge, and to keep a clean sheet, David (De Gea) was important again so all round there’s a lot of positives to take. The biggest (positive) I’ll take is how everyone adapted, the reaction and how they pulled together.”

“In situations like this there’s mixed emotions. It’s a test of people and you find out who the real characters are, who’s there with you and who’s not. I thought everyone stuck together in terms of supporting me and my staff and we managed to get the win which is very pleasing. It was a big one.

“The game panned out as I thought,” Carrick said. “When you’ve had the results we’ve had and gone through what we’ve gone through in the last few days, you’d be foolish to think you can come here, pick a team and it will be free-flowing football.

“They’re a good team, they make you work for it, they keep the ball off you and make you defend as well. We were well aware of that, we had the feeling it would be a tight game. It’s important who starts the game but it’s also important who finishes it and how you finish it.”

Manchester United are unbeaten in six UEFA Champions League games versus Villarreal (W2 D4) – against no side have they faced more often without losing in the competition (also CSKA Moscow and Bayer Leverkusen six games each).

Villarreal have never beaten an English club in the UEFA Champions League in 12 attempts (D6 L6), the most of any side has faced English opponents without winning in Champions League history.

Cristiano Ronaldo has scored six goals for Manchester United in this season’s UEFA Champions League; only Ruud van Nistelrooy in 2004-05 (8) has ever scored more for an English club in a single group phase of the competition.

Man Utd’s Cristiano Ronaldo is the first ever player to score in each of an English club’s first five matches of a single European Cup/Champions League season (excluding qualifiers).

Cristiano Ronaldo has scored 10 goals in 14 games in all competitions this season, the fewest appearances he’s needed to reach double figures for Man Utd in a single season.

Jadon Sancho scored his first ever Manchester United goal in what was his 15th appearance and from his 11th attempted shot in all competitions.